Why AA Doesn't Work (Also Why it Does) 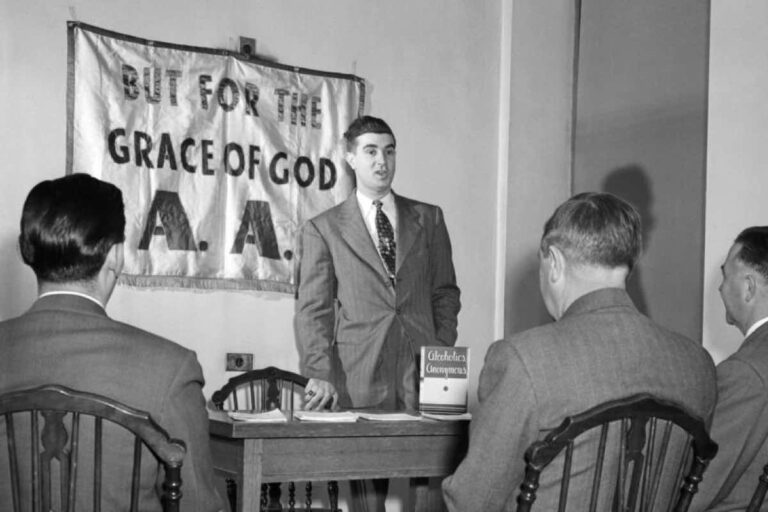 I have a huge social media group with tens of thousands of members and there are two subjects that will always raise people's hackles when it comes to stopping drinking:

1. The role of alcohol-free beers & wines, and

Alcoholics Anonymous, or AA, is possibly the most well-known method of treatment for people suffering from an alcohol use disorder or addiction.

I know there is no sitting on the fence about AA - you either love it or you hate it. So now let’s get into the meaning of this article – does alcoholics anonymous really work?

My personal journey to finding my own answers included going to some AA meetings, and I quickly learned that there were some aspects of it I simply couldn't buy into. The irrationality of alcoholics anonymous became clear to me almost immediately.

Let’s dive into why AA doesn’t work and why AA does work so well. I am going to give a highly personal attempt at some balance on where it fits in.

I get it - if you are unemployed or time rich / cash poor it makes a lot of sense. The time commitment can be huge - AA's own recommendation is to attend 90 meetings in 90 days, and there is an unspoken commitment to attending for the rest of your life. However, save for an expectation of some donations, the cash investment is minimal.

You realise you are not alone.

Addiction is generally a lonely old business. If you feel isolated and alone, having a peer group who are in the same boat can be a complete game-changer, which is a huge reason why AA does work so well. I love Johann Hari's incredible TED talk on how the opposite of addiction is connection - check it out below:

The 12-step process provides a roadmap and a sense of direction - especially in the early days. While the 12-step process has been broadly unchanged for nearly 100 years, and certainly modern understanding of psychology has moved on, it still has helped a great many people.

Alcoholics Anonymous works the acceptance muscle very hard indeed. There is no point in doing anything unless you accept there is a problem. You will find a lot of talk about 'rock bottom' being the starting point from which the journey of recovery begins.

And now my personal view on the negatives.

Groups vary hugely in terms of atmosphere and competence to help.

It goes without saying that in any self-directed group of individuals, there will be huge variances in people's experiences, which is a major reason why AA doesn’t work. Allegations of bullying, misogyny and predatory behaviour are thankfully rare, but in any group of individuals, you risk the occasional bad apple.

The time commitment is huge.

90 meetings in 90 days is not something that everyone can commit to. While the fiscal cost of meetings is negligible, even costing your time out at the minimum wage rate results in a net cost running into the hundreds. Of course, you simply have to invest in yourself if you are looking to make a sustainable change, so think what is the best asset to throw at this - time, money or both.

The success rate is lower than you might think.

There is very little evidence to support that AA works. Of course, there is plenty of anecdotal evidence on both sides of the fence but AA does not keep records (the clue is in the 'anonymous' after all) and studies have shown that success rates are in the range of 8-15, with some as high as 37%.

Living one day at a time becomes dispiriting.

Someone who bought my book wrote to me saying they finally 'Understood their Father' who was a long time AA member. He was continually frustrated with his Father's lack of willingness to commit to anything in the future. When he asked him to help him with some home improvement work the following Tuesday, the answer was, 'I will let you know on Tuesday morning'.

At some point we need to raise our eyes and have hopes, dreams and goals for the future. While overcoming addiction is obviously the first step in making your life function at least normally, at some point you need to be able to have a sense of direction again. This shows why AA does not work because it does not provide people seeking to stay sober with any sense of objectives or aspirations, instead it only focuses solely on not drinking.

It can feel pretty downbeat.

I found that the meetings were totally depressing. I went there looking for hope and inspiration, and instead found a group of people - nice people - who were all struggling in some way shape or form. I arrived in a suit with an expensive company car parked around the corner, to be greeted by a group of unemployed people, who had lost nearly everything. I listened to them, recounting stories of a fairly basic existence and felt pity and sorrow for them - not what I went there looking for.

I was looking for the person who would be my role model, somebody who I could aspire to be like, and yet all I found was a salutary warning about what my life would look like if I didn't sort this out, which is why AA clearly doesn’t work.

A very kind lady looked me in the eye and told me she didn't think I had 'hit rock bottom' yet. I politely replied the reason that I was there was so I didn't have to - I wanted to get on top of this before I ended up where they were.

You become what you think about.

Affirmations are powerful things. What you tell yourself repeatedly becomes your reality.

Can you imagine if a weight loss programme involved you having to tell yourself you were fat every day? What if you had a cancer diagnosis and the first thing the doctor said was that you will never get better? I heard an AA mantra is 'Nothing changes if nothing changes ' and nothing is ever going to change for you if you keep reaffirming the same thing over and over again.

A lot of AA members use the cucumber-to-pickle analogy to describe their condition: that a true alcoholic is someone who's turned from a cucumber to a pickle; you can try to stop a cucumber from turning into a pickle, but there's no way you can turn a pickle back into a cucumber.

What this metaphor fails to acknowledge is that humans are not cucumbers! The human body is a dance of growth, life, and regeneration. The average age of the cells in your body is around 7-10 years.

A cucumber, once picked, withers and dies - it cannot grow or regenerate. If it could, the pickle could indeed return to being a cucumber.

These are some compelling reasons why AA doesn't work. While it may provide a sense of community and some order in your life, it will not fully help you become sober.

I generally bought alcohol on the way home from the meetings.

Want to get sober now? Click here to learn more about the Sober in Seven approach that actually works!

The latest news from our highlights straight to your inbox!

See where Andy has been featured in the media so far and what will be coming soon.
Find Out More
Get started now

Author of Sober In Seven and wellness and sobriety coach in the UK, here to use my own experience of overcoming alcohol addiction to support you on your journey to a better healthier life.