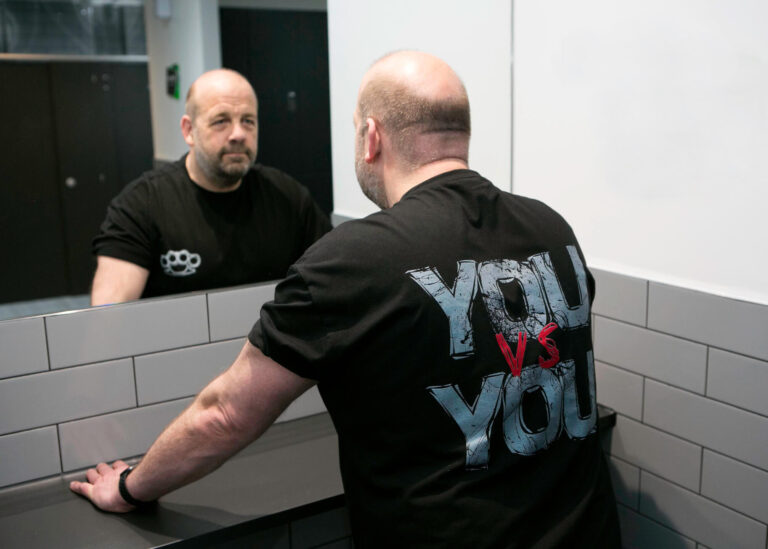 Does your life get worse when you stop drinking alcohol? If you believe some people, you would be forgiven for thinking it does.

From a personal perspective, I cannot think of a single aspect of my life that was not improved in some way when I put the bottle down

When you hear people speaking of ‘Living a day at a time’ or being ‘in recovery’ for the rest of your life, it can feel a little dispiriting.

The fact remains that for the majority of people, getting their drinking under control (whatever that looks like for them) is the BEST thing they ever did.

“I feel like I have got ME back again”

“If anyone is struggling, I wish I could share how I feel now, even for a day”

I discuss the difference between surviving and thriving on the FREEDOM programme. The difference is COURAGE. Let’s be clear, if you didn’t even feel like you were surviving when you were drinking, then to simply get to a position of ‘survival’ is huge progress, but at some point, you are going to want more, and you deserve it!

The first thing we do on the FREEDOM programme is to go through a coaching process by which we get super clear on what’s in it for YOU. Of course, everyone else in your life benefits from you being the best you, but it is vital you are the prime recipient of the health, wellness, self esteem and other benefits you are about to give yourself.

After all, you are going to have more time, more energy, more self-worth, more money and better health, so why not put it to good use?

What makes you smile? How do you build more of that into your life?

You can’t erase the past, or begin again, but you can make a new ending and that starts today.

If someone had gone back in time to 2015 and met Andy Smith back then, they would have found a massively overweight addict, crippled with Gout, suffering from panic attacks and anxiety (in spite of ‘drinking to relax’ 🙄) and on the threshold of a heart attack or stroke. If that time traveller had told me back then that in 3 years time I would have ridden the Tour de France, be helping others with addiction, and be a qualified ‘spin’ instructor at several local gyms, I would have laughed in your face. I would have also been so overwhelmed by the size of that change, that I probably would not have acted.

And yet here we are.

It’s Ok to be uncertain. It’s normal to be nervous. It’s natural to be a bit overwhelmed. BUT by taking control of your drinking, your life simply changes course for the better.

In the 100 day follow up in the FREEDOM programme we introduce new concepts and start to raise your expectations, as your energy and vitality returns.

What makes you happy? Find out and DO IT. Life’s too short to play it small. You don’t have to change the world, you just have to create an environment of happiness and progress.

Let me finish with a story about a wonderful client of mine.

This lady emailed me saying she really didn’t know what to do with herself on a Saturday night. Ordinarily, her and her husband would drink 3-4 bottles of wine in front of the TV, generally passing out before 9pm.

She asked my advice and I was a little stumped - her husband was still drinking and had zero intention of stopping. I suggested that she may wish to get an early night - after all she was generally asleep by 8.30pm anyway! Why not try that and then see what Sunday morning might bring?

I didn’t hear anything from her for a good few weeks and then out of the blue, an email popped into my mailbox.

She said that she had thought long and hard about what I suggested and decided to give it a go.

She lived on the Welsh coast in the UK and had a beautiful small beach next to her house. She always felt said when she saw all the plastic rubbish that had washed up and the general waste some thoughtless visitors may have left on the beautiful white sand.

So she started getting up early, taking some rubbish bags to the beach and cleared it of all the plastic waste, placing it in the large recycling bins.

She said she would get home, as the rest of the household were beginning to wake, cooked an amazing breakfast and (her words) ‘felt ten feet tall all day’.

Pretty cool, don’t you think? Doing things that make you feel good is an essential part of this journey, not an indulgence, so have some fun with this!

So you’ve stopped drinking, how soon will you feel better?

You have made your decision. You feel excited. You feel nervous. You know it’s the right thing, but maybe you have doubts.

There are two aspects to addiction – physical and emotional.

The physical aspect tends to resolve itself over the course of a couple of weeks. When you appreciate that alcohol is an addictive depressant, you will understand it is having a significant impact on your general wellbeing. Take that away, and the well-being improves, right?

When you stop drinking, you are no longer forcing a depression onto your body. Your body has been defending itself against that with the opposite – anxiety. This anxiety can get a bit worse before it gets better, until your physiology realizes the forced depression isn’t coming any more.

Everyone responds differently, but here – in theory – is what you can expect from a ‘typical’ journey:

You will have lost weight.

You will be sleeping better.

You will be feeling sharper, clearer and more positive.

You will have more money in your pocket.

Your risk of certain cancers will have returned to normal.

Your sceptical friends may be feeling slightly envious and be getting curious as to your ‘secret’.

You can treat yourself with the money you have saved without feeling guilty.

Your sex like may have improved due to better energy levels

Relationship issues that were aggravated by alcohol can be resolved constructively or they may simply disappear.

Good things happen when you take a break from alcohol. Why not give it a try? How might you feel?

How alcohol traps you in a cycle

One of my clients described her alcohol addiction as ‘Groundhog Day’.

(If you haven’t seen the movie, Bill Murray wakes up every morning to the exact same situation, and no matter what he does, the same day repeats over and over again with hilarious, tragic and unexpected consequences).

If you are anything like me, you may be feeling trapped in an endless cycle of waking up with good intentions, only to see your resolve falter over the course of the day.

Come the evening, the bottle is opened, and the scene is set for tomorrow. Again.

When I was drinking each evening, I had started the day with the belief that today would be different. Today I would see the commitment through and break the cycle.

Tonight, the drinking wouldn’t even begin. I would go to bed sober and awaken in the morning feeling clear headed and proud.

But that almost NEVER happened. Bit by bit my self esteem got eroded to an all time low and I felt broken and worthless.

Did I really have so little mental strength? In spite of being successful in other aspects of my life, breaking the cycle of alcohol addiction felt totally out of reach.

Why does this happen?

To understand what is going on, you first need to understand that alcohol in the human body acts as an addictive depressant.

I was an evening drinker, as I had a demanding job and worked long hours.

So, each evening I arrived home and one of the first things I did was to pour myself a drink. And another. And another.

I was forcing a depression onto my body to combat the perceived anxiety from a busy day at work.

The problem is that the human body seeks balance in all things. If you lift heavy weights, your muscles grow over time to cope with the additional workload.

The body’s response to an imposed depression is produce the opposite, to restore balance – anxiety and stimulation.

You may be familiar with the term ‘hangxiety’ to describe the ‘morning after feeling – thumping heart, shaky hands – we’ve all experienced that at some point.

The body is still producing anxiety, even though the alcohol is wearing off. It takes a while to work out what is going on.

Over the course of the following day, alcohol leaches from your system and the anxiety continues to rise.

And here’s the kicker.

This anxiety is then joined by a craving. (The nature of any addictive substance is to create a craving that can ONLY be sated by the substance that created it.

This craving manifests itself as…. Yes, you guessed it – anxiety.

Is it any wonder that we approach the following evening thinking, “Wow, I could murder a drink!”

So we open the bottle and have that first drink.

And what happens? The craving gets satisfied, and the forced depression begins to bring balance back to the anxiety your body produced after last night’s binge.

Sounding familiar? When you look at it objectively, you see that this is irrational. And that’s because it is not rational – it’s emotional.

When you have that first drink, you say, “Aah, that’s better”.

And it is, for a moment.

The horrible irony is that non-drinkers don’t feel that anxiety in the first place! All you are doing is responding to the alcohol you consumed yesterday.

Breaking this cycle is a big part of your sober journey. It can get a little worse before it gets better, but after a few days, your body realizes it can drop this anxiety defence as the alcohol isn’t coming.

You have taken an important step towards feeling like you are back in control of your life!

Join the FREE
web class
Take control of your
dependence on alcohol and
move on with your life!
Register my spot Now 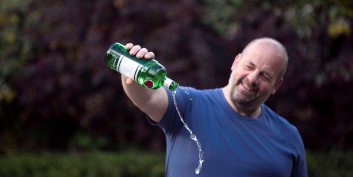 View all
Will A Sober Life Be A Much Better Adventure? Decide For Yourself.
Read More
Why is Drinking Alone Bad?
Read More
Why AA Doesn't Work (Also Why it Does)
Read More
1 2 3 … 7 Next » 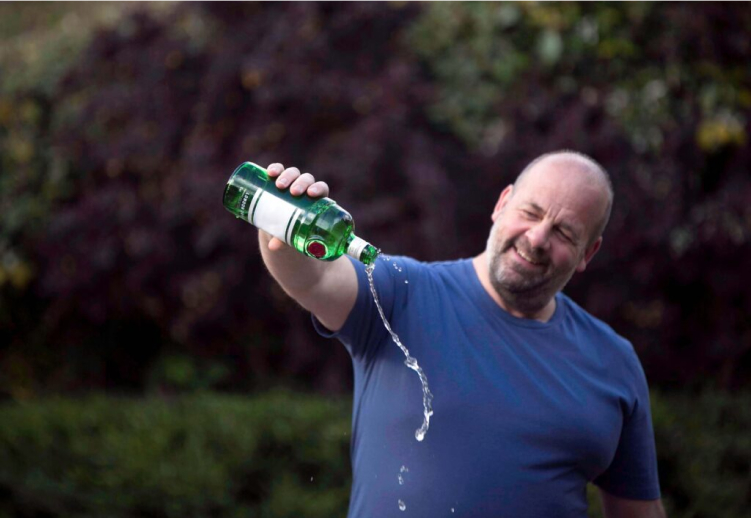 Get giving up alcohol tips send to your email

Author of Sober In Seven and wellness and sobriety coach in the UK, here to use my own experience of overcoming alcohol addiction to support you on your journey to a better healthier life.